The Origin of the Christmas Market
The earliest Christmas markets in Germany date back to at least 1434. Local craftsmen and food vendors found that if they set up their wares around the town's churches during Christmas activities, the public would buy their goods to eat and to give as gifts for the holiday. Thus the Christkindl Market was established and over the centuries has evolved from an age-old custom to the Market we celebrate today.

Mifflinburg's version of this 700-year-old German traidtion was partially inspired by the proximity of several churches on Market Street. These churches also serve as venues for various Christmas programs and provide a haven of warmth to visiting families for the three days each year that Market Street is lined with the festive outdoor huts, sounds, and unique smells that make our Christkindl Market so special. 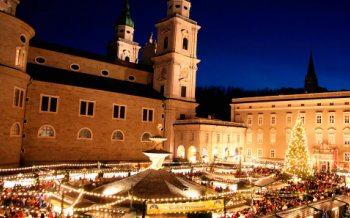 The Christkind
In parts of Austria, Germany, northern Italy, Switzerland, Hungary, and several other central European countries the traditional bringer of Christmas gifts each year is the Christkind or Christ Child. The tradition of the Christkind as a gift bringer has its roots in the Protestant Reformation when Martin Luther, in an attempt to discourage the veneration of Saint Nicholas, promulgated the idea of the Christ Child bringing gifts to children each year.

These changes created some regional differences in the celebration of Christmas within German-speaking countries, which is why many traditions today vary and sometimes overlap. These regional differences are also the reason that that many traidtional Christmas markets in Germany or Austria are called Weihnachtsmarkt, Christkindlesmarkt, or Christkindlmarkt. In the end, however, each regional version is simply a Christmas Market. 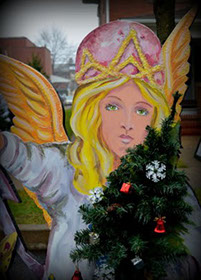 Heritage of the Erzgebirge Mountains
Many traditional parts of a Christkindl Market come from the Erzgebirge (Ore Mountains) of Saxony in eastern Germany. During the 17th century this prosperous mining area was depleted of its natural resources and the miners had to develop another method of earning a livelihood.

The miners transitioned their avocation of carving wooden figures during festive occasions into an artisan industry that still exists today. The Christmas pyramid, nutcrackers, smokers, angels, candle arches, and other holiday figures remain dominant exports from this region. Many of these decorations have become so ingrained in tradition that no genuine Christkindlmarkt would be complete without them. The Mifflinburg Christkindl Market is no exception to that fact and features many Old World traditions rarely seen outside of Germany or Austria.

Please read the following highlighted introductions to a few of these important traditions to learn more. 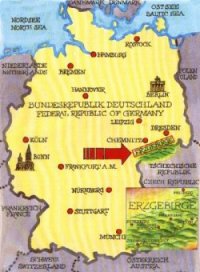 Schwibbögen (Candle Arches)
The Schwibbogen is a candle holder that is often found in the windows of homes in the Erzgebirge region. The archway symbolizes the arched entry to the shafts of the ore mines and the light of the candles represent the light of the world and the hope of returning home safety each night. The carving within the arch often depicts religious scenes, such as the nativity, but can also feature historical or local scenes. Sometimes the miner and his angel wife are included in the scene. 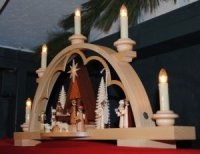 Weihnachtspyramide (Christmas Pyramid)
The signature image of the Mifflinburg Christkindl Market is the Christmas Pyramid which originated in the Erzgebirge region in about 1850. The fascinating Christmas treasure, which is often used as a table decoration, features rotating paddles atop the four-sided, open, tapered structure. Movement is fueled by the heat from candles on the base of the pyramid, which produce the energy needed to turn the tilted blades. A central shaft connects each level of the pyramid and when the paddles are propelled by the candle heat, the fan blades rotate slowly.

A fifteen-foot-tall Weihnachtspyramide graces the central square of the Market each year. Its familiar image has become synonymous with the Mifflinburg Christkindl Market, as it is often seen on advertising materials, signs, brochures, this website, and more.

Bäume (Trees)
Another common feature of Christmas pyramids are the Spanbäume (carved trees) and the Kräuselbäume (turned trees). These trees are made at the Mifflinburg Christkindl Market by a local craftsman and can be purchased as independent Christmas decorations. Visitors are welcome to watch their production. 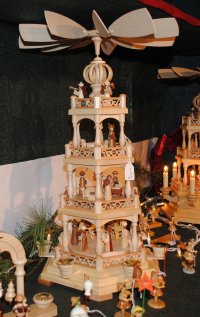 The Tinsel Angel
A touching legend from the 17th century Christmas Market in Nuremberg explains the origin of the Tinsel Angel: A craftsman's only and much-loved daughter died. The man would never be happy again. For as long as he lived nothing could restore his heart or comfort him. One night his daughter appeared to him as an angel in a dream. The vision was so beautiful that upon waking the father could think of little else. He was not able to erase the picture of this angel from his mind, so he carved a head with her features in wood. In the old Nuremberg style, he fashioned a gown cut from waferthin brass called tinsel along with a high coronet of the same material. Then he added two wings made from the same tinsel.

He had made an angel which looked just like the one in his dreams. It took him many days to complete the angel. Allowing nothing to disturb him, he was determined to complete this task. His friends were worried and as they looked through his workshop window, they saw the angel. They were enthralled and persuaded the craftsman to make another angel and take it to the Christmas Market. The Tinsel Angel still exists as a symbol of the Nuremberg Market. Millions of them have been reproduced since then and the craftsman, so the legend says, became a rich man. Each year at Market Time, volunteers lovingly dress the Tinsel Angel in her gown and wings of gold. 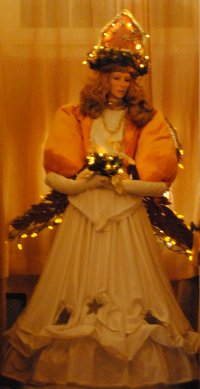 Zwetschgenmännla (Prune Men)
The origin of the prune figure dates to the 14th century in the Nuremberg region of Germany. An old man who had been very ill wanted to give the neighborhood children something in return for taking care of him. The man was poor and had no money, so he gathered plums from the tree in his yard and began to make little men (Menchen) with nuts and dried fruits. The legs and arms were made of prunes, the body of dried figs, and the head was a walnut. He dressed the figures and gave them to the children who had been so kind to him.

Subsequent additions to the figurines included the Zwetschgenweibla (prune women) and various special characters. These characters traditionally include butchers, hunters, sailors, maids, etc. The chimney sweep is the most popular as it is said to bring its owner good luck. Today these prune figures are sold at Christkindl markets throughout Germany.

The Prune figures of the Mifflinburg Market are designed after American life just as the German figures represent folklore of that country. These were developed by Sarah Miller, a local resident, initially under the tutelage of Rudi Skucek. Sarah has expanded the handcrafting to include miniatures, couples, a do-it-yourself kit, costumes and a “Find The Prune Man” game. Sarah also does custom designing and has over 100 original figures to her credit. They have become one of the most popular souvenirs of the Christmas Market. 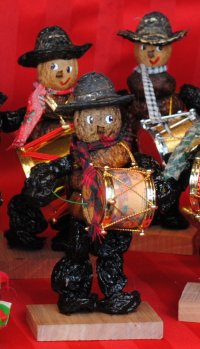 Räuchermann (Smoker Man)
The German Smoker Man or Räuchermann, originated in the Erzgebirge Mountain area of Saxony in Southeastern Germany in the late 1700’s.  The carved or turned wooden figures are incense burners.  The figures are crafted from two pieces of wood that fit together to form the body.  The incense cones are placed inside the upper portion of the figure and the smoke escapes through the mouth.  The incense is associated with the Three Wise Men and the gift of Frankincense along with gold and myrrh.  The figures have traditionally represented men of ordinary, everyday occupations rather than political or military figures. 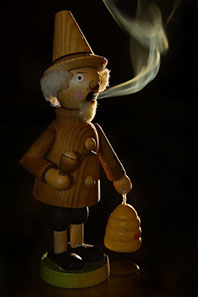 Nussknacker (Nutcracker)
Carved nutcrackers appeared in the Erzgebirge area in 1850, and no significant changes in design have been made since that time. The nutcrackers are figures of authority and domination, with stern imposing posture and frightening faces.

When Tchaikovsky's ballet, The Nutcracker Suite, premiered in St. Petersburg in 1892, popularity for nutcrackers grew exponentially. The ballet became very popular in the US in the early 1950s and the fascination for collecting these intriguing figures spread to this country as well.

Many of the GIs in Germany during World War II visited Christkindl Markets, open-air fairs or markets. They discovered the sturdy and decorative Nutcracker and adopted it as a good luck piece. When the soldiers returned home, a new comrade accompanied them. Strengthened by the nutcracker's ability to ward off evil, the soldiers brought this symbol of protection to their families and loved ones. And so the nutcrackers with their rich heritage arrived in the United States and were here to stay. 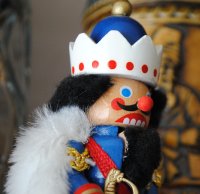